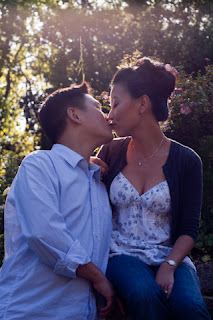 I had the great honor of shooting Jen and Paul’s engagement photos a few weeks back.  I’ve known them for about eight years now; though not so well in the beginning as we started bumping into each other through mutual friends.  I have to say, I totally thought Paul was a thug and kind of scary when I first met him due to buzz cut bleached hair (turns out that hair was “gold” to go with the blue and gold colors of Cal).  Later on Jen, Wei-Ling and I were roommates in one of the most fun apartment I’ve ever been in, 3 gals together – 4 if you count Charcoal!

The photos were taken around Berkeley in the Rose Garden, a few in downtown, and down by the Marina.  We totally crashed someone else’s wedding down in the Rose Garden (don’t worry! They were just setting up.)  I hadn’t done a formal shoot or a location shoot in awhile, but the light was perfect and I was reminded just how much fun it is!  I imagine it was more fun for me than them, because I didn’t have to face up to giant camera lens staring at me; and I started getting a bit gleeful in telling them to kiss again…and again…and again.
Mwahaha THE POWER, er, all in the name of getting a good shot! 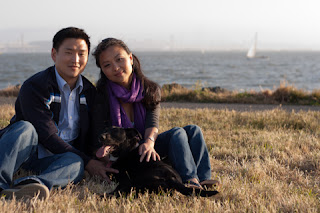 Doing a photo shoot is a great way to test that wedding makeup and hair before the big day  Jen had gotten her trial run done right before; and I think we all quickly figured out that the updo was pretty, but it made Jen look like not-Jen.   And on your wedding day, it probably helps to still look like you, especially for the pictures!

Special guest appearance by Charcoal in these photos; I can’t really imagine Paul and Jen without her there too.  I had a blast…I can’t wait for their actual wedding day!

For the full gallery, take a look HERE.