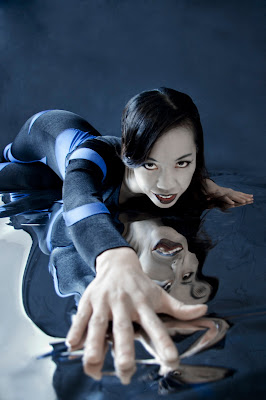 Last month I had the chance to do a photo shoot with AJ, who had just completed a new costume.  Both of us are big fans of Batman Beyond, and she had cosplayed the character Inque for a “Spies and Mercenaries” themed party.  She wanted a few pics of her costume, although she told me it was not one she had spent serious time on.  (Um. Really?! You can’t tell it’s a “throwaway” costume.)

I’ve been wanting to test out shooting on a reflective surface for awhile and figured this would be the perfect time for a little experimentation.  At the moment I didn’t have the resources to rent out a studio, strobe lights, and a floor made of black plexiglass (gives a GREAT reflection), so we had to settle for ghetto-macgyvering something together in my bedroom.  We ended up using natural light with some borrowed Canon EX-500 flash, sheets for the background, and a 4’x4′ piece of mylar.  It worked worked out pretty well to capture some of what makes Inque so cool as a villain – the ability to melt herself into a black inky killer/thief.

What do you think? Personally, I think AJ is maybe a little TOO good at costuming because I was getting seriously freaked out editing her photos.  Doesn’t she look scary?!

Of course even villains have their mellow moments.  They can’t be in a murderous rage all the time, you know.

Favorite photos from the shoot here.  We ended up having to do many poses lying down and curled up to get the best effect out of the mylar.  Since it is so soft, it doesn’t give a perfect reflection, and I only had a small piece to work with.  If I’d had a full studio lighting set and done maybe 12′ x 12′ on the ground we could have done more dynamic action and full body poses.  However, for a shoot that was on the very ghetto side in terms of materials, I’m very happy with the results.  A little goes a long way!

Next up: A little bit about how I set up the shoot.