A Quiet Night for Tea

While I was making that cheongsam the other week I watched “In the Mood for Love”, a movie I had heard about for a long time but never got around to actually seeing.  It seemed fitting, as the supernaturally beautiful Maggie Cheung walks seductively around in a series of simply amazing cheongsams and backgrounds.  I absolutely loved the cinematography of this movie and it inspired me to do a little photoshoot with the dress I had just made.  I wasn’t intending to mimic an exact scene of the movie, but just a bit of the same feeling. 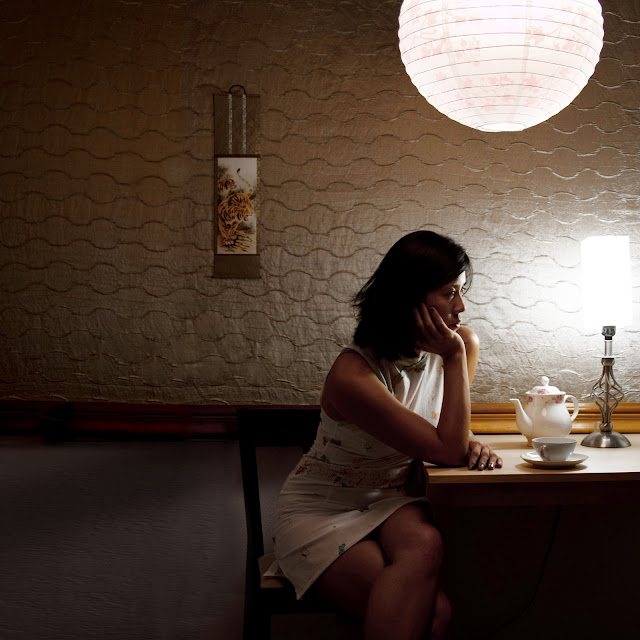 Putting the shot together:

I did a lighting test with a single desk lamp instead to study how the light might fall in the photo.  You can see it ended up being similar but not too much like the lighting I used in the end photograph.  Single light source, but it’s reflected fairly well off the light table surface and I’m sitting pretty close to it.  I liked the  feel of that light, but knew I would end up with a different table lamp that fit the scene a bit better.  I liked how the light simply trailed off around the edges of the photo due to the single light source and wanted to replicate that – with two light sources visible in the end photo.

Here’s what my final setup looked like.  Kind of ghetto when you take a step back and see that this is just the far side of my bedroom (which by the way, is quite large so there’s room for this kind of thing).  Cost breakdown, and set contents.

1) background – a curtain panel with fun texture from Goodwill – $5
2) Hanging lamp shade from Daiso: $1.50
2a) already had hanging cord lamp, but did see them for sale for about $15.
3) tiger poster  from Daiso, $1.50
4) desk lamp – the bulb light is filtered though a piece of white paper I put inside the glass shade. already owned
5) teapot, tea cup, table, chair, already owned
6) fake wall trim – found some crown moulding pieces in my garage, so free.  I think you could get some cheap pieces for hm, $10 at home depot?
7) Background stand: $40 off ebay.  This isn’t something I think anyone who really wants to claim they are being uber cheap would get, but I was ready to buy and own one.  It’s a lightweight one, probably not for holding up heavy backdrops.
8) duct tape – $6. Wow this stuff is amazing.

So there it is!  I shot the thing in low light, and slow shutter speed so I was holding myself pretty still.  As you can tell, I’m quite a fan of the way light wraps itself softly around objects when you have a nice long exposure.  This was a very fun little shoot, I will definitely be doing more in the future.

The funny thing about taking pictures for a hobby is that I always feel so awkward about posing for photos.  Despite the fact that I often do pose for my own photos (a teacher in college was very surprised to hear me say I am camera shy, since I used myself as a model for most projects), there’s a huge difference in doing something with a self timer, and posing while someone is actively looking at you through the lens.  And, most of the things I take for myself aren’t the typical “fashion” look.  While I’m of course vain enough to want to look good in the photo, you’ll notice my own self portraits I’m often not looking at the camera or really just not STANDING there trying to look like a model.

After the wedding, WL and I went around our fabulously appointed hotel to take some more glamor oriented photos with the dresses we had made.  We’re making it an ongoing goal to feel more confident about how to compose ourselves for this kind of photo.  Hand in hand with that, I’d like to learn how to take better photos, how to direct people to pose.  What kind of lenses, what angles to put myself at?  Photography is such a strange thing where angles that look strange in real life 3D are flattened in a way that really works on camera.   Maybe I should start watching Top Model to get some more clues?  It’s definitely a skill!  Models aren’t just pretty people, it’s work to get yourself to look good in a photo.

We took many photos but here’s the two I ended up liking.  Ha!  Favorite is where I don’t have to look at the camera.  The only one I liked where you can see my face is the most “natural” one, which, I guess is all right.  Having photos of myself looking vacant eyed and artificial wouldn’t really look like me at all.