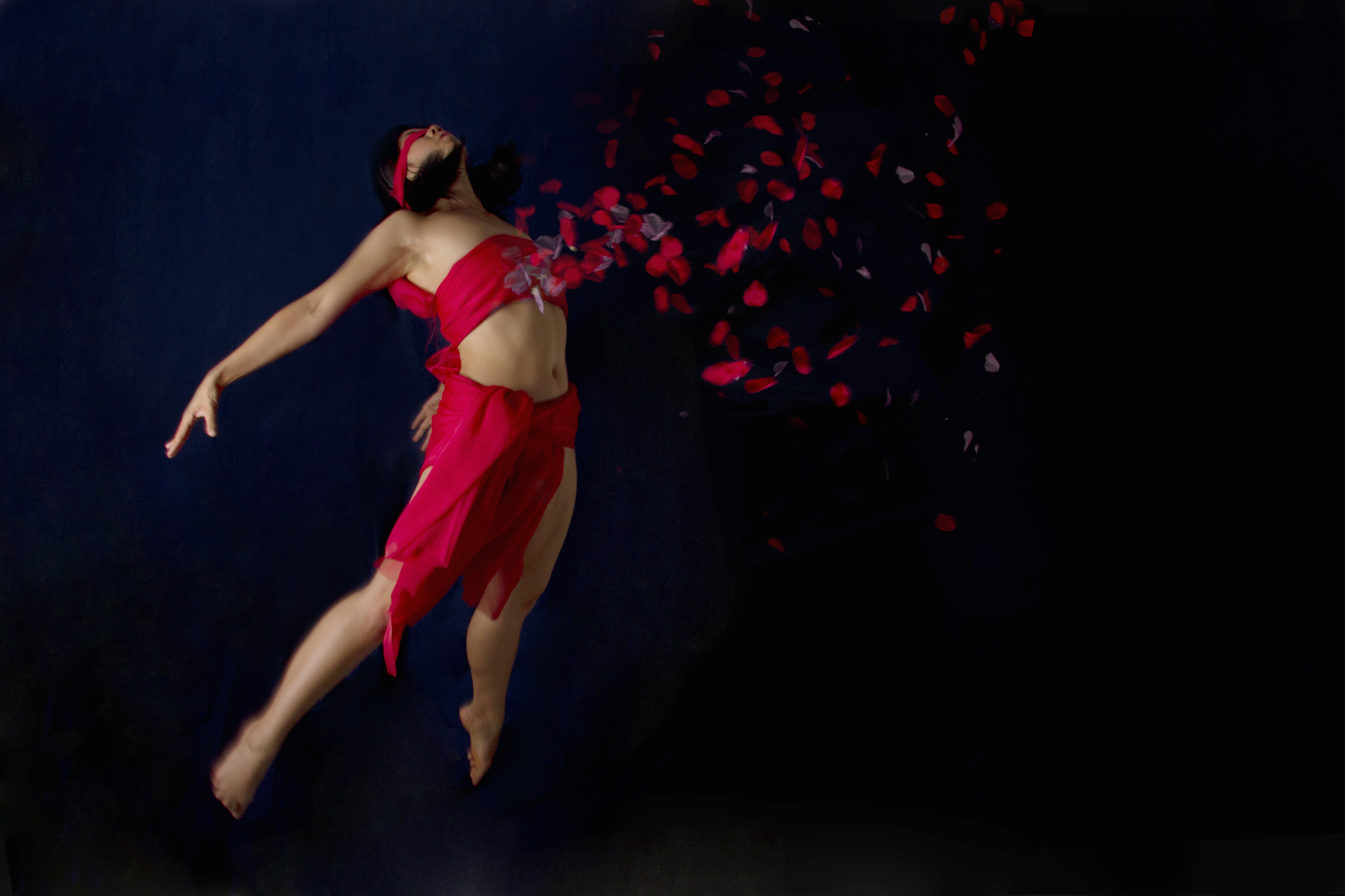 This is my photographic equivalent of the actual desire to get things off my chest, but there’s certainly times when it is appropriate to unload and times when I feel like I’m in danger of returning to angsty teen days of posting up a leading “Oh sigh…life is so awful” status message up on some social networking site.  Hooray for art to succinctly summarize emotions! The idea for this piece was floating around in my head for the last few weeks.  Originally I had wanted something quite a bit more gruesome in appearance with a more bloody, exploded look, but after some experimentation and feedback, that idea seemed a bit overkill. (Though…I may return to the idea in a future piece.)

I feel like I’m back in school too!  This piece was a combination of double exposure, and using flash to stop motion. 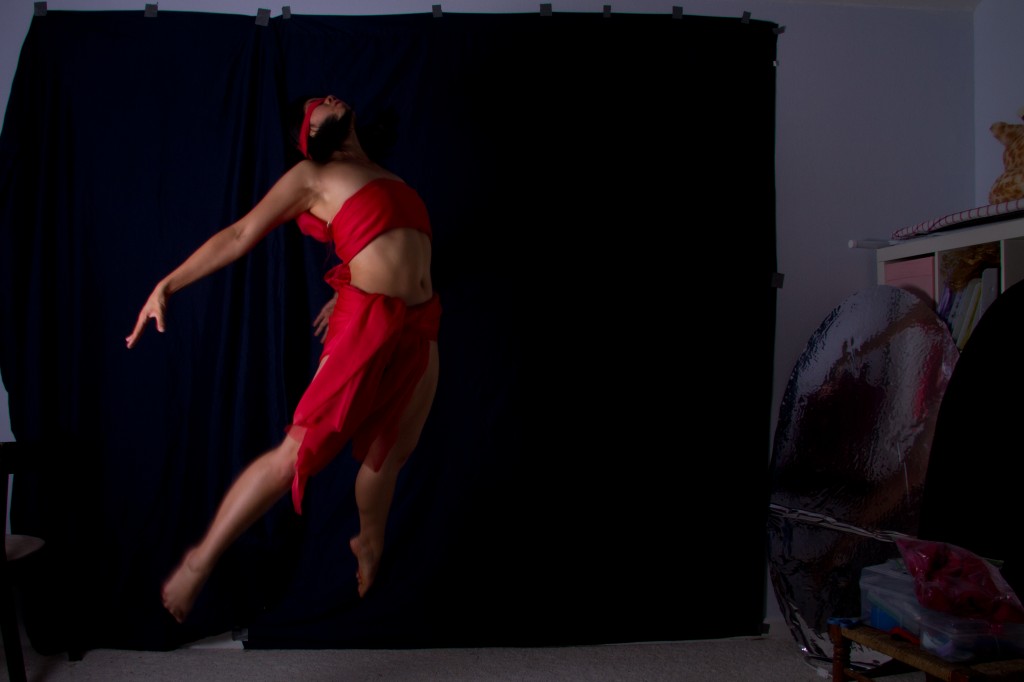 Here is my original jumping shot.  You guys can have a great view of what my room looks like; in lieu of a studio large enough to hang full infinity backdrops you’ll see where I had to digitally extend my background.  One day, it would be fabulous to not have to do that extra work outside of the camera, but until then I’ll freely admit it’s cheaper for me to just keep on doing this in my bedroom. F 9, 2 second exposure with a strobe pop – I’ve been working a lot lately with these longer exposures mixed with the strobe.  I find that having a faint continuous light source adds a good glow to the background over that exposure, but there isn’t enough light to get me on camera except during the actual strobe flash.  I originally had tried a black background, but my hair blended in too well with that. 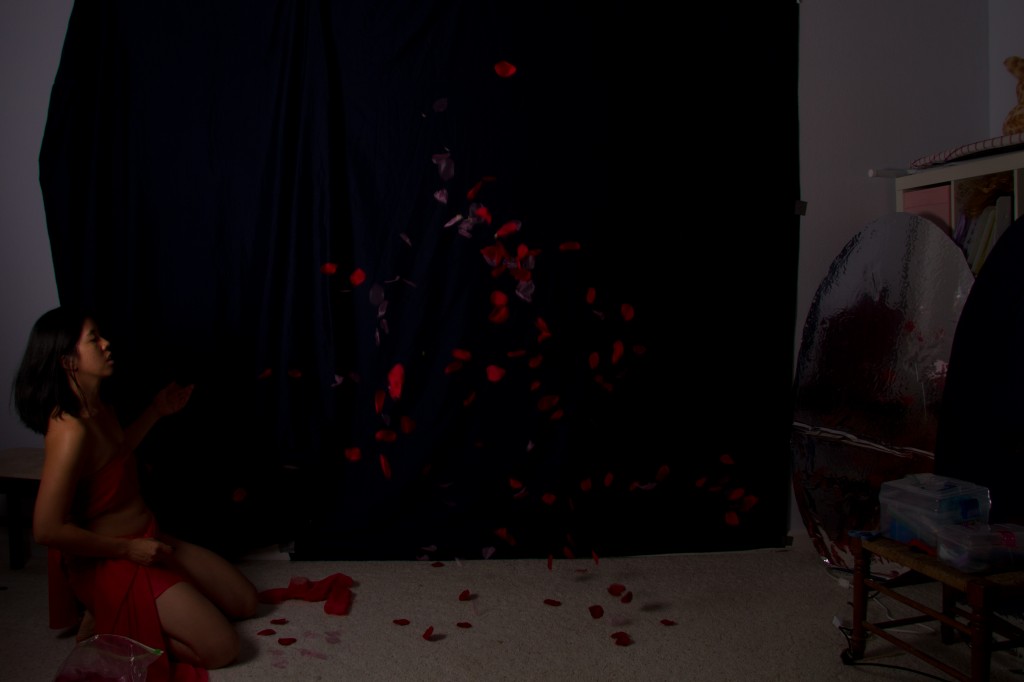 I layered a shot of tossed rose petals over this, check out my unglamorous assistant of myself in the background.  Same thing, F 9, 2 second exposure with strobe pop.   This is the only petal toss shot I had – I had to leave my home studio setup and was expecting to get back to do a few more tries later.  However, on importing the photos I found this shot had what I wanted.

So – I took shot one, digitally smoothed out and extended the background.

I rotated and layered a selection of the rose petals three times to create the volume I needed.  This is on a transparent layer.   Thumbs up for layer masking in Photoshop.

Then I just layered the two and added a few lighting adjustments for the final image.  Overall I believe I was only shooting for 20 minutes because I had been mulling this idea over for quite awhile, and I honestly expected this session to be only a testing session and that I would need to come back and try this all again a second time.  I was pleasantly surprised when evaluating those test images to have some that really worked.  Maybe I’m getting better at that whole pre-visualization thing where I get that whole piece figured out ahead of time?

So cool, both the shot and how you put it together! It also reminds me of what a NatGeo cinemaphotographer told me one time, which is that everyone asks him how he did certain things, but the cool part is how he came up with the idea in the first place.

awesome shot! i literally thought it was one shot altogether. you are so talented!